A fire broke-out on the Bucharest Subway on Tuesday morning, 172 passengers…

A fire broke-out on the Bucharest Subway on Tuesday morning, 172 passengers were evacuated through the tunnel between the Universitate and the Roman Square stations / Two passengers ended up in hospital / Traffic resumed after two hours

A subway car is stuck between Universitate and Piața Romană stations after thick smoke has billowed out of the subway entrance after a fire reportedly broke out in a conductor box at track level. ISUBIF has activated the red intervention plan. 172 people were evacuated from the underground, two of whom were taken to hospital. The subway completely halted on the M2 line at Unirii-Romană.

Metrorex representatives announced that the fault that caused smoke to billow from a train leaving Piazza Romana to Berceni on Tuesday will be analyzed by a joint Metrorex – Romanian Railway Investigation Agency technical commission. Details here.

Subway trains run alternately between Piața Romană and Unirii 2 on a single track. On the rest of the mainline, trains run normally. Train movements are being reorganized until the train is withdrawn from the depot for analysis and repair, Metrorex said. 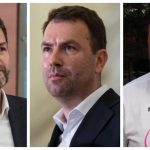