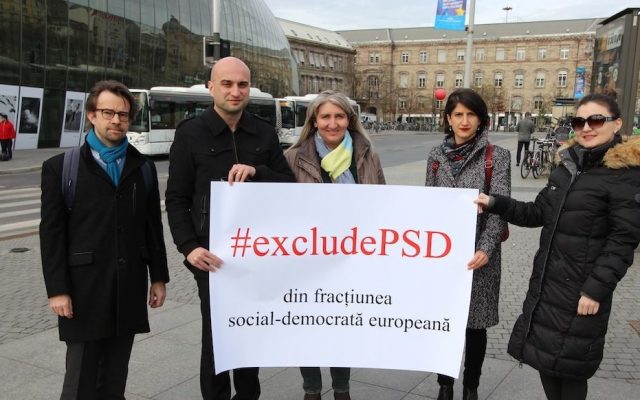 A petition to exclude PSD from the family of European socialists was filed in the European Parliament: the exclusion of PSD would be a reaffirmation of the values and goals of the S&D Alliance

A delegation of Romanians living abroad filed on Tuesday a petition signed by nearly 18,000 people at the European Parliament, calling for the exclusion of PSD from the family of European socialists.

„The petition «Exclude PSD» from the Social Democratic faction was handed over to MEP Jo Leinen (S&D, Germany) at the European Parliament in Strasbourg,” is mentioned in a statement given by the initiators of the petition.

The delegation of four petitioners was received by Social Democrat MEP Jo Leinen at a meeting lasting 30 minutes. MEP Jo Leinen is a member of the AFCO Committee on Constitutional Affairs of the European Parliament.

„The delegates argued that the exclusion of the PSD would distance the S&D Alliance and the European Union Parliament from a highly controversial political party, currently controlled by people who have violated norms essential to any democratic society by introducing legislation which has been criticized both politically and by specialized bodies. These changes were usually imposed by procedures that have circumvented any debate, such as emergency ordinances. The exclusion of PSD would be a reaffirmation of the S&D Alliance’s values and objectives,” the press release said.

In the opinion of the delegates, experience has shown that the passive attitude of the S&D fraction towards the Romanian PSD in recent years has not yielded the expected results.

„On the contrary: while PSD made the controversial „justice reform”, Liviu Dragnea’s party could use the prestige of the membership in the S&D faction to create the illusion of international legitimacy in front of its own voters. Also, by associating PSD with European Social Democracy, part of the Romanian electorate mistakenly believes that there is a value identity between PSD and European Social-Democratic parties, ” they said.

Last but not least, the petitioners say, an exclusion of PSD would signal that the European Union Parliament, through the S&D Alliance, supports the fight against corruption in all EU Member States in general and Romania in particular.

The petition was filed both in Romanian and in German.