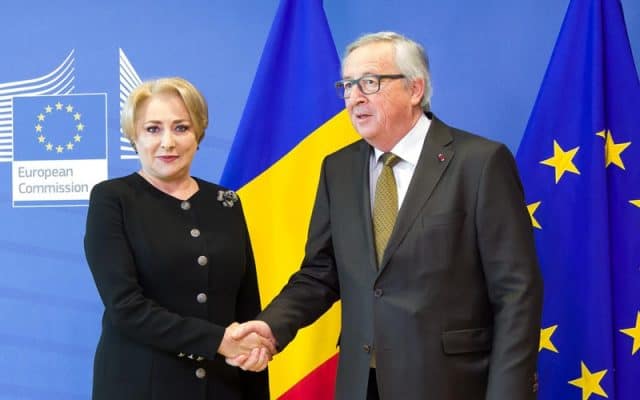 In line with today’s report the Commission is confident that if the current positive trend is continued then Bulgaria will be able to fulfil all the remaining recommendations and therefore expects the CVM process to be concluded before the end of this Commission’s mandate.

When it comes to Romania, the Commission is recommending immediate additional measures that are essential to put the reform process back on track and resume the path towards the conclusion of CVM as set out in January 2017 and therefore the Commission will continue to follow closely and will assess the situation before the end of this Commission’s mandate.

Today the College discussed and adopted its latest reports on progress under the Cooperation and Verification Mechanism (CVM) for Bulgaria and Romania.

· You will remember that this process relates to a commitment taken by the two countries upon accession in 2007. This was done in order to tackle certain remaining weaknesses in the areas of judicial reform and the fight against corruption – and in the case of Bulgaria also in the fight against organized crime.

· President Juncker had set the objective to conclude the CVM process before the end of his mandate and we published a set of final recommendations to achieve this goal back in January 2017. Today we take stock of the developments in the last 12 months.

· If this current positive trend continues and Bulgaria maintains the reform momentum – sustainably and irreversibly – the Commission is confident that the CVM process for Bulgaria can be concluded before the end of this Commission’s mandate. We will of course continue to follow progress closely and will make further assessment of progress still under this Commission.

· It will be important for Bulgaria to continue to consolidate the progress made and – once the CVM has been completed – to continue the work and ensure appropriate monitoring and the necessary safeguards on the national level.

· When it comes to Romania, While some steps have been taken to implement the final recommendations from January 2017 report, the developments over the past 12 months have put into question and reversed the progress made over the past 10 years. This is specifically the case with regard to the amended justice laws, the pressure on judicial independence in general, and the pressure on the National Anti-Corruption Directorate in particular.

· We are therefore setting out eight additional recommendations for immediate follow up. Those measures are essential to put the the reform process back on track and resume the path towards the conclusion of the CVM. To give you some examples, we are asking Romania to immediately suspend the implementation of the justice laws and subsequent emergency ordinances.

· We are also asking Romania to revise these laws and ordinances, taking into account our recommendations and those by the Venice Commission and GRECO.

· We are asking to suspend all ongoing appointments and dismissal procedures for senior prosecutors immediately and to relaunch a process to appoint a Chief Anti-Corruption Prosecutor.

· And we are asking to freeze the entry into force of the changes to the Criminal Code and Criminal Procedure Code.

· Let me add one more important point that goes for both countries: the reports also take note of a broader factor – free media. It is a point that goes beyond the scope of the CVM, but it has an impact on the advance of judicial reform and the fight against corruption.

· The media and civil society should be able to hold those exercising power to account in a pluralistic environment free from pressure. This is not only important to effectively pursue the necessary reforms covered by the CVM, it is also the bedrock of any well governed democracy