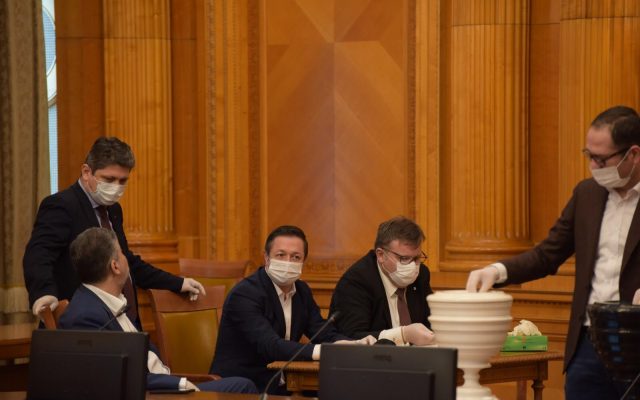 Romania’s Parliament voted a new Liberal (PNL) Government in an extraordinary fashion caused by the new coronavirus epidemic on Saturday, just hours before President Klaus Iohannis announced plans to apply a state of emergency starting next week. The new government received the support of the Parliament despite that most of the Liberal MPs could not attend the procedures, with the prime minister and most members of the nominated government team also staying away due to being forced into isolation after coming in contact with a fellow politician who had tested positive.

President Iohannis announced later on Saturday that he planned to introduce a state of emergency in the country starting next week. By Saturday, the number of positive coronavirus cases detected in Romania exceeded 100.

The new government led by Ludovic Orban received 286 votes in favor and 23 against, with one abstention during procedures today. That comes despite only 42 of the 111 MPs representing the Liberal party, which forms the government, attended the procedures to vote their own government.

Meanwhile, some 80% of MPs belonging to the opposition Social Democrats (PSD) and the smaller USR and PMP parties voted in favor of the PNL government. This comes despite PNL’s sustained efforts in recent months to prompt early elections and diminish the hold of the PSD, their biggest rivals, in the Parliament.

Hearings before the vote took place through video-conference as only three ministers were not in self-isolation. MPs cast their votes in small groups of only 20 people to comply with norms of prevention for the coronavirus epidemic.

The swearing-in ceremony was organised to follow strict preventive procedures, as ministers could leave isolation under special sanitary rules.

The vote of support for the new government came despite seven of the nominated ministers had received non-binding rejection in parliamentary committees.

How did Romania come to this situation?

So, Romania’s new Liberal government came to be voted by opposing MPs, against whom they have campaigned for months, with PNL’s own parliamentary support and its own team stricken by the new coronavirus.