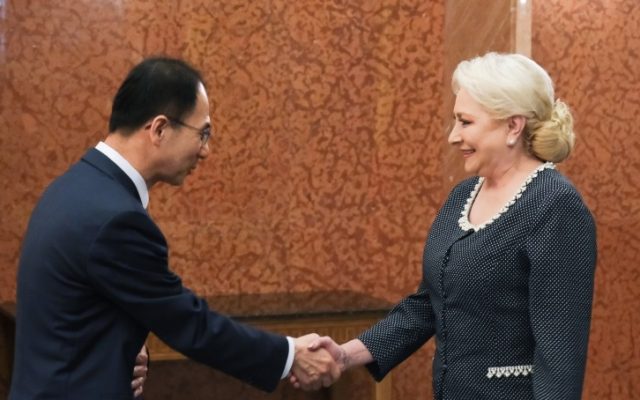 Consumption-led growth has remained strong, raising people’s incomes toward those in advanced Europe. However, macroeconomic imbalances have also deepened: fiscal and current account deficits have widened and inflation pressure is rising again. Unless policies change course, the progress in convergence could suffer a setback that hurts the real incomes of retirees and poor people particularly hard. A more balanced policy mix is needed to reduce the likelihood of such a setback: first and foremost, fiscal consolidation complemented by monetary tightening and greater exchange rate flexibility. Additionally, policies need to become more predictable and governance improve to enhance the medium-run prospects of income convergence.

1. While helping people’s income to rise faster towards the levels in advanced European Union (EU) countries, Romania’s consumption-fueled growth has raised macroeconomic imbalances. Inflation pressure has re-surfaced after a lull late last year, disproportionately affecting the real incomes of the poor and potentially undermining competitiveness. The fiscal and current account deficits have increased. Both public and private investment have been on a downward trend in recent years, weakening long-term growth prospects. In all this Romania is, to an appreciable extent, an outlier relative to its peers.
2. A change in the course of policies is needed to reduce the likelihood of another boom-bust scenario. A downturn tends to weigh more severely on the income and living standards of the poor. Whereas growth is currently projected to remain around 4 percent in 2019, fueled by wage increases and consumption, the current account deficit is projected to exceed 5 percent of GDP. Over the medium term, the current account deficit is projected to remain elevated, while GDP growth slows, reflecting lost competitiveness. More balanced policies and re-energized structural reforms are necessary to support long-term growth potential and sustainable income convergence toward the advanced EU countries.

3. Durable fiscal consolidation based on high quality measures, starting this year, is paramount to put the economy on a more resilient footing. Fiscal deficits should come down in good times so that they can go up in bad times in support of people’s incomes. Typically, this has not happened in Romania and the current juncture is no exception. More fiscal adjustment will also mean less inflation and thus less monetary tightening, which is good for competitiveness.

Achieving the 2019 budget target deficit of 2¾ percent of GDP would be the first step. In our estimate, meeting this target would require additional measures of 0.9 percent of GDP. A credible commitment to reduce the deficit to 1½ percent of GDP by 2022 would further strengthen the confidence in the budget framework and help reduce vulnerability.
The pension law currently under parliamentary discussion warrants a reassessment to balance social needs and fiscal sustainability. The provisions in the current bill would create new spending of about 4 percentage points of GDP. This would add a severe strain to the government finances, burden the young generation, and crowd out other priority spending on public investment, education and health.

Structural fiscal reforms would facilitate and sustain medium term fiscal consolidation. To improve revenue collections, strengthening the revenue administration (ANAF) is critical, including by modernizing the IT system and adopting modern compliance risk management to ensure that everyone pays what they owe. Given the numerous changes in recent years, the tax system should be carefully examined to identify distortions and areas where revenue gains are possible.

Room for improvement exists on the expenditure side too. The budget structure can be improved by moderating growth in rigid spending—the wage bill and pensions—while making room for more investment. Expenditure efficiency can be improved by further strengthening the procurement process and expenditure reviews.
…and monetary tightening needs to contribute as well

4. Monetary policy needs further tightening, as inflationary pressure is expected to stay elevated. Inflation is driven by the additional fiscal stimulus currently envisaged, output that is above its long-term potential, and rapidly rising wages. The first line of defense against high inflation and losses in people’s real incomes has to be the independence and credibility of the central bank. The second line, monetary tightening. That said, the extent of tightening can be much less if fiscal policy is adjusted as we recommend. The strict liquidity management announced by the central bank is a step in the right direction. By contrast, the recently introduced benchmark index for bank loans will hamper the transmission of monetary policy. The sizable current account deficit increases the premium of greater exchange rate flexibility as a shock absorber.

5. The banking system remains sound. The capital and liquidity positions are solid and non-performing loans have approached the EU average level. Good progress has been made to improve resilience, in line with the 2018 Financial Sector Assessment Program recommendations, including implementation of a debt-service-to-income limit and currency-differentiated liquidity requirements. A systemic risk buffer is being considered to address the vulnerability arising from banks’ large exposure to the Romanian state. Further financial development can be supported by preserving a stable economic and legal environment, avoiding legislative initiatives that distort market principles.

Continued rapid wage growth—including the minimum wage—in excess of productivity gains bodes ill for competitiveness. Going forward, minimum wages should be set by a transparent and objective mechanism reflecting improvements in productivity.
Determined reform of state-owned enterprises, accompanied by a commitment to strong corporate governance, would improve their financial performance and service to the public.

Efforts are needed to improve investment in public infrastructure, including to achieve more effective absorption of EU funds. To this end, special emphasis should be put on strengthening public investment institutions. Public-private partnerships often entail substantial risks. Therefore, such projects should be subject to careful analysis of their value-for-money, fiscal risks, and alternative financing options (e.g. EU funds).
Good governance is the foundation for stable economic development

7. Effective and sound institutions are critical for inclusive and sustained growth. Reducing corruption helps improve government revenue, enhance spending efficiency, and strengthen competitiveness. Strong governance has also been found to help reduce emigration, especially of the high-skilled. Whereas Romania’s anti-corruption initiatives had been internationally recognized, some of the amendments to the justice laws and the criminal codes have been criticized for potentially threatening the independence of Romania’s judicial system and weakening the capacity to fight corruption. However, we welcome the strong commitment made by the government to uphold judicial independence and the rule of law.

8. Greater predictability and medium-term orientation of policies would generate positive dividends for investment and growth. Adequate impact assessment, prior consultations with stakeholders and a more measured implementation would strengthen policy predictability and effectiveness. In this regard, several measures included in emergency ordinance 114/2018 (and subsequent amendments) leave room for further adjustment in light of their likely adverse effects on economic development. The sector-specific taxes and incentives—including on banks, construction and utilities—could create distortions that hinder investment or the efficient allocation of resources

An IMF staff team visited Bucharest during May 27-June 7 to conduct the 2019 Article IV consultation discussions. The team is grateful to the authorities and other counterparts for their warm hospitality and constructive dialogue.