The Emergency Decree 114/2018, which has prompted many reactions, might have more profound implications than initially thought. It appears to be a first step in the current governing coalition’s strategy of attempting to enhance the state’s role in the economy. At the same time it widens further the gap between economic and political reasoning by ignoring basic economic principles. These types of measures usually bring, in time, additional costs for the population and push the economy on a path of lower potential growth. .

There are three fundamental issues related to the ordinance measures that have the largest impact on the economy. They relate to timing , the economic rationale and the fact that they apply to a small and open economy.

Broadly speaking, the financial repression referred to in the title is a set of measures that governments use to increase tax revenues through various means. Interventions in the economy range from price controls, especially interest rates, to capital. The goal is to reduce public debt and budget deficit and / or generate additional funds for discretionary spending.

It is well known that taxes have a strong redistributive effect in the economy. On a macroeconomic level, the impact of the proposed fiscal measures as a whole is a transfer of revenues from the private sector to the state. These budgetary revenues will, in theory, finance the projected increase in pensions and wages and perhaps, partly, the newly created Development and Investment Fund managed by the National Commission for Strategy and Prognosis (CNSP) (what it matters is the mechanism and not, necessarily, the institution itself).

In essence, CNSP becomes a so-called SPV (Special Purpose Vehicle), channeling relatively large preferential investment flows into the economy, in the equivalent of 5% of the GDP of 2018, an activity which circumscries its current statutory scope. Economic logic is flawed once again when it comes to the process of financing these investments. The CNSP is able to access loans from the budget with a fixed interest rate of 1% per annum while the state itself borrows currently at rates of almost 5% per year. Inescapably, there will be an effect of these investments in the economy. However, this effect must be seen in terms of the opportunity cost. In Romania, among other things due to institutional deficiencies, the return on public investment, or ona public-private partnership, is still lower than the purely private one. The economic risk of this VRS can be greatly amplified in a period of crisis, increasing budgetary costs.

An essential element of the financial repression is the control of interest rates, both as consequence of the decree and the proposed law aimed at capping household bank lending interest rates. The imposition of a bank asset tax related to ROBOR is self-destructive for the banking sector: under unfavorable economic conditions, with rising inflation and interest rates, the asset tax becomes even more burdensome, hampering the recovery process and, correspondingly, economic growth.

The claim that ROBOR could be massively manipulated is ridiculous as long as the state, considered to be the least risky entity in the economy, currently borrows at rates between 4-5% a year, well above the 12-month ROBOR, for example. It may bes possible that political logic here overcomes economic logic , and another purpose of this bank asset tax, exaggerated in magnitude, is actually to increase the state’s role in the banking sector, following the model already patented in Poland and Hungary in recent years.

The timing for these measures is sensitive in terms of their impact on macroeconomic balances. They overlap with a growing need for financing the economy beyond the limits considered to be „normal”. The current account deficit is already worrying, around -5% of GDP in 2018. The budget deficit, calculated as a rolling average over the past 12 months – to get its dynamic outlook – represented 9% of GDP in 11 months of total budget revenue (attention, not GDP, but only the actual revenue that the state collects annually).

As can be seen from the chart below, the monthly margin of maneuver has narrowed considerably in the past year, and as a result of poor policies of uncontrollable wage growth. This margin of maneuver will be further reduced in the immediate future as the economy slows down – partly due to the net effect of the ordinance measures(reduced investment in the energy and banking sector, higher credit costs for the economy, etc.) 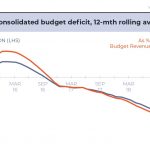 *the deficit is calculated as a share of state revenues, Source: calculations from M Finance data

Under these conditions, the safety valve becomes the channel of the exchange rate. The increased need for financing the economy will be reflected in higher interest rates, which will put a pressure on the exchange rate. Even if in the short term the population could finance – at a very possible loss – a part of the budget deficit at interest rates offered by the state, medium or long-term sources of external or internal financing will be needed at higher interest rates.

In a small open economy such as Romania’s, the political logic of controlling the interest rate or the exchange rate is completely outdated. Recent examples of much larger countries next to us, such as Russia in 2015 or Turkey in 2018, show how wasting international reserves is unnecessary in defending an exchange rate or maintaining interest rates that do not reflect the macroeconomic situation. Finally, in such episodes, economic logic takes precedence over the political one.

Fixing prices and attempting to control interest rates in an open economy with a profligate fiscal policy is always a dangerous game . All the more so as both the internal (budget deficit) and the external (current account) balance are widening fast. Under these circumstances, even a relatively low negative economic shock, of either domestic or foreign origin, can send the economy into a spin.