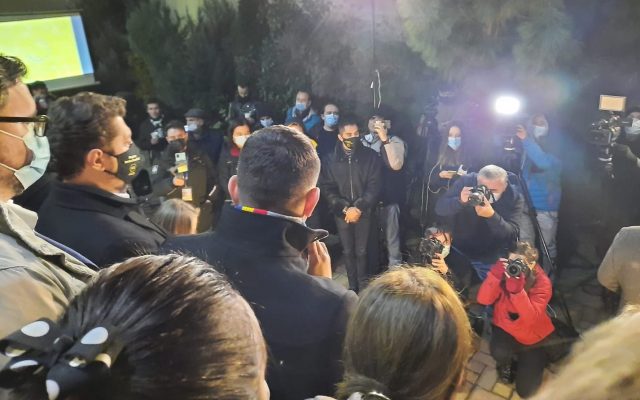 The general elections in Romania on Sunday caused a shockwave across the political spectrum with the rise of a new, populist, far-right movement to parliamentary status, according to partial results with most of the votes counted. The Alliance for the Union of Romania, which brings together anti-Hungarian and anti-Western voices joined by opponents of masks and other populists, was essentially non-existent as late of September, when local elections took place. Yet it managed a 9% score in the parliamentary elections on November 6, against a background of unprecedented voter apathy towards a poll organised in pandemic circumstances.

Romanians were summoned to cast their votes for deputies and senators on Sunday. The elections were especially significant given they were the first round of polls after the rupture caused across the society by the Social Democrats (PSD), who won the 2016 general elections and led Romania through two years of attacks on the judiciary and massive anti-government protests, including those which caused a violent riot police intervention in August 2018.

The elections were pushed by President Klaus Iohannis and the governing Liberals (PNL), who came to power a year ago when Iohannis was re-elected head of state. The polls were organised despite calls of postponement due to the Covid-19 pandemic. The President and PNL hoped to take advantage of a still high level of support before the pandemic eroded their electoral base and voters still showed angst towards the PSD. Iohannis was especially vocal about his wish to see the strength of the PSD cut down in the Parliament.

Yet the elections were far from what they hoped for.

Yet the biggest shock came with the high vote count in favour of a new party about which many voters hardly heard anything about until late in the campaign – the Alliance for the Union of Romanians (AUR – which means “gold” in Romanian).

The burst of AUR in mainstream politics

By Monday morning counting, AUR claimed 9% of the votes nationally, making it the fourth biggest party in Romania. It was essentially non-existent in the September 2020 local elections, a year after it had been established officially as a political party.

AUR is a new political group which was built in the shadows of major populist movements and events from the past year, from actions against the interest of Romania’s large ethnic Hungarian community to protests against mask-wearing and other restrictions applied during the pandemic.

So it brings together populist figures and far right militants which continue a tradition which had long existed on the margins of the society. Between the 90’s and early 2010’s, components of what AUR stands for came in the form of former far-right Greater Romania Party; the movement led by prominent populists such as Gigi Becali or a party led by former TV showman Dan Diaconescu; as well as hardline conservatives among the civil society.

For the past several years, the PSD, with its political discourse, was the political party to cater for nationalistic, extremist interests, but more through propaganda and less through proper political actions.

As, after the fall of its previous leader Liviu Dragnea in mid-2019 (Dragnea was sentenced under corruption-related charges), the PSD stepped away from radical discourses, this electorate was abandoned.

The 9% AUR represents equals, roughly, the votes lost by the PSD from its common electoral base in. this election. But AUR also scored well in PNL strongholds such as the city of Cluj, or in other parts of Transylvania where USR scored well in local elections less than three months ago.

AUR was established in September 2019 by George Simion, previously known as the founder of a platform which calls for the union with the Republic of Moldova. Co-president is Claudiu Tarziu, a radical voice who used to be part of an organisation – the Coalition for Family – which pushed for a referendum against same-sex marriage two years ago. Another leader is Dan Tanasa, known for his involvement in events such as the violent clashes in Uzului Valley in June 2019, which exploited anti-Hungarian feelings among radical nationalists.

Who are its leaders, as G4Media.ro reported here:

Before establishing the party, George Simion ran as an independent in European elections in May 2019, with a 1.29% gain in that poll. He used to take part in pro-union demonstrations in the Republic of Moldova and in Romania and was expelled from Moldova in 2015. In 2016, as he disobeyed rules during a pro-union demonstration in Bucharest, prominent political figures protested his retention by the police at the time.

Claudiu Tarziu used to be part of the leadership of the Coalition for Family when that organisation pushed for changes to the Constitution so that it banned same-sex marriage. He was the founder of a magazine called Rost almost two decades ago, promoting nationalistic messages and Christian “resurrection”  as well as leaders of the Romanian fascist movement in inter-War Romania. During the campaign, Tarziu described the new party as one against the system, fighting “hypocritical” parties in the “national interest” to push for the “reform of the political class.”

In June 2019, a group of several dozens Romanians forced their entrance in a military cemetery in Uzului Valley, which had been locked by local, ethnic Hungarian authorities. The action, which led to nationalism-fueled clashes, was partly organised by an “Orthodox Brotherhood”, the New Right movement and George Simion. Another AUR representative, Dan Tanasa, was lauded by Russian propaganda outlet Sputnik for the statements he made at the time.

The party first came to more prominent public attention with a protest against mask-wearing in Victoriei Square, Bucharest in September. They organised the action – started as a protest against restrictive pandemic-related measures and later presented as one against the system – following the model used in a similar protest in Bulgaria, which was organised by a pro-Russia party. Some 400 people attended the Bucharest protest.

First to credit AUR with electoral gains were more recently a Liberal politician – Rares Bogdan, now a MEP, who used to be a TV host who promoted Simion as a “patriot” during his shows – and a former spokesman of the Ponta government in the mid 2010’s, Mirel Palada. Both spoke of a “surprise party”, AUR, which was expected to come out of nowhere and gain a relevant number of votes in the elections after an “explosion” of interest during the electoral campaign.

Dan Tapalaga of G4Media.ro, on the rise of AUR:

Dan Tapalaga of G4Media.ro compares AUR to a “political Frankenstein’s monster” that appears to be invented, fed in the underground and developed for a purpose. He says that while it may appear to many to be Russia’s working, it most probably isn’t as it looks more like the creation of a domestic laboratory, with its leader receiving support from key well-connected domestic people and institutions.

In his commentary, Dan Tapalaga asks what would have happened to Iohannis and PNL’s agendas if the PSD, garnering the votes now spent on AUR, had gained up to 38% of the vote on Sunday, with the Liberals losing ground due to their handling of the pandemic.

And he points out that AUR is a group without charismatic or notorious leaders, without its own life and territorial structures, “an artificial creation which has lured certain types of voters as the butterflies to the light (…) When the light is turned off just as it was turned on, on command, these voters will go blind again, trying to find a political vehicle to represent them again”.