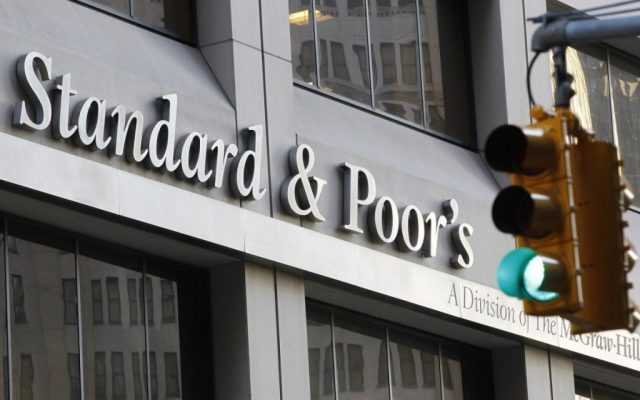 OVERVIEW
— Although we expect the economic and fiscal fallout induced by COVID-19 to push Romania’s net government debt to 43% of GDP in 2020, and interest spending to increase to just below 5% of fiscal revenue, we assume significant fiscal consolidation after the 2020 general elections.
— We believe that Romania’s access to external financing and still moderate external debt levels mitigate pressures from a reduction in foreign direct investment (FDI) and remittances in 2020.
— We are affirming our ‘BBB-/A-3’ sovereign credit ratings on Romania and maintaining the negative outlook.

OUTLOOK
The outlook is negative because we see risks to Romania’s fiscal and external balances over the next 18 months if policymakers cannot stabilize and consolidate Romania’s budgetary stance after this COVID-19-induced recession.

Downside scenario
We could lower our rating on Romania if:
— Fiscal and external imbalances remain elevated for longer than we currently anticipate, with the absence of fiscal consolidation resulting in higher public and external debt or a wider interest bill than we currently forecast.
— A lack of economic policy synchronization increased exchange rate volatility, with potential negative repercussions on public- and private-sector balance sheets.

Upside scenario
We could revise the outlook to stable if the government makes headway in anchoring fiscal consolidation, leading to a stabilization of Romania’s public finances and external position.

RATIONALE
We affirmed the rating, given Romania’s comparatively low net general government and external debt. We believe Romania will have the ability to absorb the level of deterioration we now expect for 2020. Romania has solid market access, which mitigates risks associated with the elevated short-term public-sector financing need. We furthermore expect measured monetary policy execution, and recognize Romania’s EU membership as a key policy anchor, which benefits the country’s institutional framework, in our opinion, and will likely bring in financing support from extraordinary structural funds being deployed in 2020.

Although we believe the current fiscal fallout will provide political leeway to significantly roll back the costly hikes of public-sector pensions legislated to take place in September this year, we still see significant risks. In particular, the fluid political landscape and what is likely to be a confrontational run-up to general elections in December continue to cloud the visibility of the consolidation trajectory, in our view.

Institutional and economic profile: Highly politicized environment clouds policy visibility
— We project Romania’s economy will contract by 5.5% in 2020.
— We expect the government will roll back significant parts of this year’s planned pension hike.
— Parliamentary elections will be pivotal to determining fiscal trajectory.

Romanian authorities introduced a national state of emergency in mid-March with strict constraints on the movement of people and the closure of its international borders. Relaxation of the lockdown measures commenced on May 15 as society moved from a state of emergency into a state of alert, in practice meaning that the economy is gradually reopening with certain sectors continuing to be subject to social distancing restraints.

We now estimate that Romania’s output will contract by 5.5% in 2020 compared with our previous expectation of 3.5% growth. In particular, we expect the firm lockdown measures to take a significant toll on domestic demand, primarily in the second quarter. Furthermore, weak external demand from key trading partners will eat into Romanian full-year exports, of which over 20% go to Germany and 10% to Italy, countries also facing deep recessions in 2020. We currently estimate Romania’s economic activity will gradually recover from midyear 2020 and rebound to 4.0% growth in 2021. That said, we recognize that our current projections are subject to high uncertainty because the relaxation of containment measures could be a protracted exercise and subject to setbacks.

Romania’s confrontational politics and highly politicized discourse cloud predictability of policy. The COVID-19 pandemic has fostered some political unity, however. It seems to have catalyzed formation of a government after months of disagreements, which included two no-confidence votes and a few failed attempts to force early elections. That said, we anticipate the underlying confrontational dynamics of Romanian politics will likely re-emerge as the unifying COVID-19 context is replaced by the divisive election mode in the latter half of 2020. We assume that parliamentary elections will be held before 2020 is over. We continue see elections being held as central to providing visibility on medium-term policy choices.

We believe the COVID-19-induced fiscal fallout will provide the government a political context to reduce the cost of pension hikes legislated for September 2020. But as elections loom, we believe it will stop short of fully retracting the increase and still raise pensions by about 10% (instead of the 40% agreed in earlier legislation). This will add about 1% of GDP to the fiscal deficit in 2021. The remainder of the budgetary allocation in 2020 will be re-distributed among regular expenditure, but higher owing to COVID-19 effects.

We continue to regard Romania’s EU membership as an important policy anchor, and we expect the excessive-deficit procedure the EC initiated in February 2020 will help instill fiscal discipline and facilitate the budgetary re-balancing that we envision in our base case for 2021-2023. We do not rule out that Romania will seek additional international cooperation to support fiscal balancing measures while at the same time unlocking access to cheap financing. We do not expect Romania to make any progress on such cooperation until elections are held.

Policy choices in recent years have weakened the foundations for sustainable public finances. Since 2018, and despite buoyant private demand and rising wage inflation, Romania has been running expansionary fiscal policy, resulting in twin deficits among the highest for any major emerging market sovereign and rendering Romania vulnerable to potential domestic and external shocks.

The contracting economy, alongside planned stimulus and falling fiscal revenue will lead to a further widening of Romania’s budgetary deficit this year. In response to effects of the COVID-19 lockdowns, the authorities have launched a series of fiscal and economic measures to shield companies and workers from the necessary economic standstill. We estimate the overall size of the fiscal stimulus package thus far announced at 3.0% of GDP, among the weakest in the region. Including the budgetary effect of automatic stabilizers, such as from unemployment insurance, we anticipate that the measures introduced will increase fiscal expenditure by 1.2% of GDP and include:
— Social assistance expenses, including payroll subsidies for furloughed workers worth 0.7% of GDP.
— An appropriation of 0.3% of GDP to supplement the health and unemployment budgets for expense related to COVID-19.
— An additional 0.1% of GDP of health expenditure increases via central government transfers to hospitals, as well as salary increases for health workers.
— Credit support in the form of government guarantees on bank lending to small and midsize enterprises for working capital and investment purposes will add a total 1.5% of GDP to the state’s guarantee commitments.

Although the measures can effectively cushion some effects of the downturn, we believe that they will also result in a significant fiscal deficit of about 8.0% of GDP, including a decline in revenue due to the economic contraction, pushing net general government debt past 40% of GDP.

With spending on wages and pensions now standing at about 90% of tax revenue, Romania’s budget structure is rigid. Furthermore, yields on government securities have edged up in 2020 amid the political and fiscal instability in combination with the COVID-19 context. And with surging short-term financing needs, the interest bill could rise further.

We estimate the public-sector financing requirement in 2020 will comprise about 11% of GDP and we expect the majority will be sourced from the domestic market. In this regard, we believe the domestic banking sector will be supportive of government financing needs, but its capacity to digest the total financing needs of the government will be constrained. Its existing exposure to the government, at more than 20% of the banking sector’s assets, is already substantial. Positively, we observe that Romania successfully placed Eurobonds worth EUR3.3 billion on May 26, exhibiting strong subscription levels and calming yields from the elevated trades recorded through March. As per the Eurobond issuance, the Romanian Ministry of Finance has secured 50% of its revised funding need for 2020, based on its expectations of a fiscal deficit of 6.7%, a figure we believe will likely prove to be understated.

In response to the liquidity shock induced by COVID-19, financial market volatility, and a string of unsuccessful government bond auctions in the first quarter of 2020, the National Bank of Romania (NBR) announced a series of measures. These include the provision of banks with liquidity through repurchase agreements, the reduction of the reserve requirement rate, and a commitment to unlimited government bond purchases on the secondary market.

We expect the NBR will uphold its policy credibility, retain its independence, and successfully anchor inflation expectations as it assists domestic markets to digest the government’s financing requirements over 2020. The NBR’s bond purchases to this point have added liquidity to the market and the central bank holds a net creditor positon to the banking sector. That said, given the magnitude of the government’s short-term funding need, and the risk it could expand if fiscal revenue disappoints, could mean the NBR will have to act to a greater degree than it had originally envisioned. We expect the NBR will proceed with caution to balance its inflation-targeting regime and foreign exchange rate considerations amid an expanding quantitative easing program.

We believe Romania’s current account deficits will widen, reaching about 5% of GDP in 2020 as a reflection of the government’s fiscal position. Pent-up demand and a solid rebound in exports in 2021 will temper the current account deficit toward 4% of GDP in our base case through 2023. We observe that the current account deficit is increasingly covered by debt-financed inflows, which pushes Romania’s narrow net external debt ratio toward 45% of current account receipts in 2023. There are risks for further strains on net FDI as international companies face pressure. Most recently, automaker Dacia, subsidiary of French automaker Renault, has seen its medium-term expansion plan cut by EUR100 million. Additionally, we believe that remittances–Italy is the origin of about one third–will reduce notably in the short term.

The wide current account deficit and its deteriorating financing mix could exert pressures on the currency. On this note, we forecast the NBR will continue to tap its foreign currency reserves to prop up the leu through 2020, given it is an election year. We compute usable reserves at about 15% of GDP on April 30, and we believe they will remain strong over 2020. Elevated exchange rate volatility could have severe repercussions on public- and private-sector balance sheets, in particular because about half of Romania’s government debt is denominated in foreign currency. Moreover, an estimated 40% of financial sector deposits are denominated in foreign currency, as well as roughly one-third of sectorwide loans.

Romania’s predominantly foreign-owned banking sector remains sound, in our view, and we see it as a limited contingency risk for the government. The Romanian banking sectors enters the COVID-19 turbulence from a position of strength with a sectorwide loan-to-deposit ratio of 72% at year-end 2019, from its peak of 142% in 2010. We expect liquidity and solvency ratios have built sufficient buffers to contend with the lower profitability expected from the consequences of the Ministry of Finance’s nine-month loan moratorium. The system also benefits from low levels of nonperforming loans, which, at 4%, have reduced notably from over 21% in June 2014.