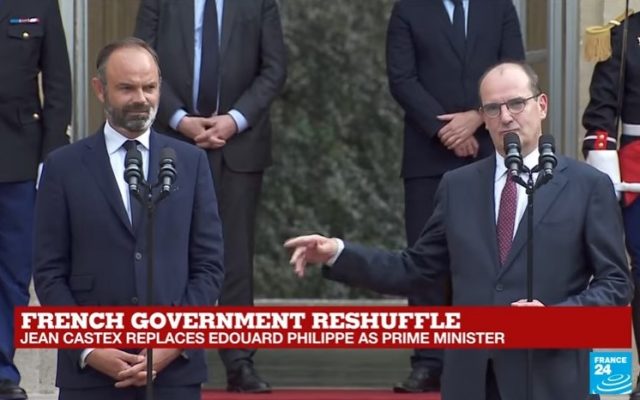 Following the resignation of the French Prime Minister, President Emmanuel Macron appointed Jean Castex to this position. The new Prime Minister is expected to form a government before Wednesday.

Who is Jean Castex? Affiliated like its predecessor with the right-wing party Les Républicains, he was the former Deputy Secretary-General under former President Nicolas Sarkozy and was more recently charged by Emmanuel Macron with the implementation of a de-confinement plan. Moreover, he has worked for the State for nearly 30 years that made him an expert of the governmental mechanisms. Finally, since last week, the scenario of a new lockdown has been mentioned and the New Prime Minister’s experience of crisis may be seen as an asset for the French President.

The government changes but nothing will really change

The Head of State, Emmanuel Macron, promised in April to “reinvent himself” after the pandemic crisis. According to a previous survey carried out by Odoxa-Dentsu Consulting for France Info and Le Figaro, 75% of the French wanted the President to change his political program, and 67% of them thought that a change of government was necessary. Therefore, the decision of Emmanuel Macron to appoint a new Prime Minister seems to be in the wake of this popular will.

However, in the same survey, the French also underlined the wish of an ecological u-turn, confirmed by the recent aresults of the municipal elections. On June 28th, several important cities fall under the greens like Bordeaux, run by the right-wing since 1947, Lyon, the 2nd largest French city or Tours, Poitiers, Besançon.

In the same time, the rather positive reception of the Citizen’s Convention on Climate by the President on June 29th let people expect either a change for a Green Prime Minister or nothing. For Manon Aubry, eurodeputy from La France Insoumise (LFI) – far-left party – the appointment of Jean Castex is “a fake suspense on the casting which will not have any impact on the continuation of an anti-ecological and anti-social policy” (twitter).

The First Secretary of the Socialist Party, Olivier Faure, also supports this idea : “the president confirms unsurprisingly his direction. The day after the crisis will be rooted in the right-wing as was the day before the crisis”.

For others, the choice of a new Prime Minister, even more unknown from the public may be seen as a step forward to a super-presidential regime. The former Prime Minister more popular than the President (40% of the public opinion vs 33%), had shown that he had the qualities of a government leader.

Jean Castex on the contrary is easily described by the French newspapers like Le Monde and l’Obs as a technocrat whose legitimacy has to be found in the hard skills rather than in the soft skills.

Thus, even among the political family of Jean Castex, his appointment is highly criticized. According to Eric Ciotti, the First Secretary of Les Républicains : “Threaten by the popularity of Edouard Philippe, [E. Macron] goes more and more toward a personal and authoritarian power” (twitter). He added: “In the time when the French expected a strong political message, the change of Prime Minister highlights a technocratic shift”. Last, another deputy from the Union of the Democrats and Independants (UDI) ironically asked on Twitter if the position of Prime Minister was still necessary.

Preparing the next presidential elections? In September, 19th, Xavier Bertrand, a right-wing politician stated on the TV channel France 2 that he was thinking about campaigning in the next elections in 2022. Yet, the new Prime Minister knows well Xavier Bertrand and the senior officials from his party Les Republicains. He was his chief of staff in the ministry of Health, and then in the ministry of Labour.

The new Prime Minister, Jean Castex, will take the floor tonight at 20.00 (local time) on the TV channel TF1.